The History of the Blomidon Inn

On April 1, 1881 , Rufus Burgess purchased for $1,400, the lot on which the Blomidon Inn now stands. In the 1871 census, Burgess was listed as a merchant who owned 80 shares in ships. He soon learned to maximize his profits by building his own ships and operating them until they could be sold. The sales usually occurred in a foreign port such as London, England or perhaps in Scandinavia. Rufus built four tall ships between 1874 and 1880.

Following the Purchase of the land Rufus proceeded to build Perth House. His wife, Georgie’s family, had come from Perth , Scotland . This gave Burgess the opportunity to make a public display of his success and to provide a fine home for his family’s enjoyment. In his mansion, he used teak and mahogany for wainscots, mantels, and staircases. There were marble fireplaces and gold gilt mirrors. A local German artist was invited to paint a ceiling mural of a ship wreck. The house was just as grand on the outside with the Mansard Roof (the same roof style found on Seminary Hall – the oldest building on Acadia University’s campus), the widow’s walk, the iron front gate, the playing court, the sun dial, and the splendid rose gardens on the East side of the house. During his tenure at Perth Place, Rufus would build an additional nineteen tall ships, the Canada , being the most spectacular.

On July 7, 1892 The Morning Herald in Halifax announced that 5000 “delighted” spectators had witnessed the launching at Kingsport of the CANADA , “the largest Vessel Ever Built in the Dominion ( Canada )”. Cox was the master builder and Burgess was the proud owner.

FOR SALE BY PUBLIC AUCTION

On the premises April 20 th , 1915 , at 11 am , that valuable and commodious residential property at Wolfville, owned by the estate of the late C.R. Burgess, having frontage of 200 feet on side street and 150 feet on Main Street , consisting of about 4½ acres, with dwelling of 20 rooms, furnace heated, and beautifully finished. Barn, Storehouse, Ice House, and orchard of about 200 trees, principally apples of the winter varieties.

The family of William Henry Chase developed the port facilities at Port Williams to avoid the high freight costs at the Port of Halifax and on the railway lines. His fleet of steamers literally loaded its cargo of apples within sight of the orchards. His family with their operations were the foundation of the Scotia Gold and Avon Foods organizations. These were the biggest influence in converting the Nova Scotia apple industry from a domestic operation into a multi-million dollar international business.

It is unlikely that Chase ever lived here. In 1918 he sold the property for $11,000 to Horton W. Phinney, a Halifax merchant.

Phinney’s doctor recommended the family move from Halifax to recuperate after the Halifax Explosion. The Phinney Music Company (the advertisement to the left is from 1919) was the family business. Gertrude Phinney, a daughter, was a young child when the family moved here. Her pony was tied up on the front lawn. She continued to dine at the Blomidon Inn until the 1990’s.

In 1920, Phinney traded houses with W.C.B. Harris and moved to Acadia Street . Will Harris had joined his family business which was located on the waterfront in Wolfville where ships docked to unload. They were dealers and agents for agricultural and building materials. The Phinney home became a gathering place and a social centre of Wolfville during the period between the two world wars.

Will Harris sold the house to the Mr. & Mrs. K.M. Dunfield in 1947. They created the Blomidon Lodge. In the prosperous period after the war, it was a place so popular with travelling salesmen that the large annex was built on the back of the House in 1949. The Blomidon Lodge was operated by the Hopgood family in 1957.

In 1961, the Blomidon Lodge fell on harder times. It was sold by auction and was purchased for $25,000 by Acadia University for a residence called Blomidon House to handle the increasing enrolments due to the “baby boomers”. In 1962, the conversion was complete and became a residence for 49 men. From 1965 until the spring of 1969, it was a women’s residence.

Acadia University sold the House to Love and Lester Rawding. The Rawdings lived on the first two floors of the original house and rented 11 apartments. They sold the house to Keith and Catherine Stewart in 1974 who also rented the 11 apartments.

In 1979, the House was again in difficult financial times. At a bankruptcy auction on December 31 st , 1979 , the Rawding family took it over once more. Gale (daughter of Love and Lester) and Peter Hastings began extensive restoration and renovations. In 1980, the Hastings opened the doors for guests to stay in the “Blomidon Inn”. There were 11 guest rooms handsomely decorated by Peter and Gale with fine antiques and quilts made by Gale. Mrs. Hastings also served breakfast to the Inn guests. In 1981 elegant country dining was offered to guests and outsiders. By 1985, the “Blomidon Inn” was a flourishing 21 room Country Inn, with a highly reputable dining room. Unfortunately, Peter Hastings , became ill and the Blomidon Inn was sold to Australian businessman, Ron Phillips in August, 1985.

Ron Phillips was creating an inn dynasty in Nova Scotia. At the Blomidon Inn, he converted an apartment to six more rooms, built the large terrace, purchased many more antiques and installed the old English lanterns lining the driveway. Unfortunately, his expansion activities ran too far ahead of his cash and the operations of the Blomidon Inn were taken over by receiver Clarkson Gordon Inc. in December 1987.

A partnership of Jim & Donna Laceby and John Bragg, Nova Scotia ‘s famous blueberry baron from Oxford , Nova Scotia , offered the successful tender for the assets. The Laceby family began operating the Blomidon Inn on April 29 th , 1988. The Lacebys had been operating the Amherst Shore Country Inn since 1980. They would become the sole owners of the Blomidon Inn in 1998. During this stewardship, the inn has continued to flourish as a “Signature Inn” in Nova Scotia , well known for its dining as well as accommodations. In addition, the family has opened a “House of Gifts” on site, as well as, extensive gardens for both guests and visitors to enjoy.

As the 21 st century opens, the Blomidon Inn is operated by the Laceby sons, Michael and Sean. Mike overseas the operations of the inn and Sean presides in the kitchen. Donna still very much enjoys shopping for and tending the “House of Gifts”. Mike & Sean’s older brother, Rob, and his wife Mary operate the Amherst Shore Country Inn. Near Amherst , it’s a Northumberland Strait , seaside inn.

From it’s beginnings during the golden age of sail, through the 20 th century with it’s explosive technological developments and into the 21 st century’s information age, the Blomidon Inn is and has been considered by many as one of “the” places to stay and visit in Nova Scotia. 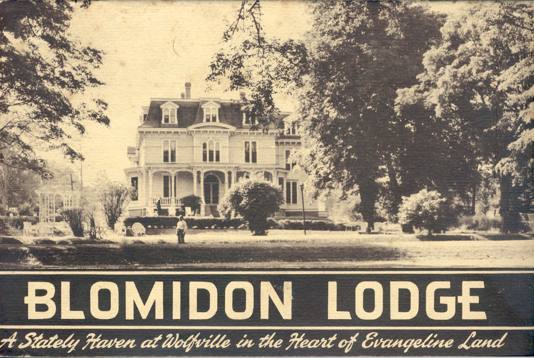